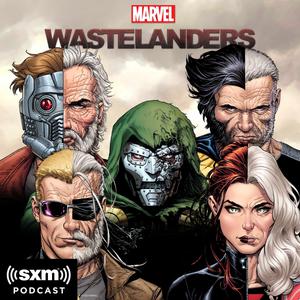 Wolverine, Black Widow, Star-Lord, Hawkeye, and Doctor Doom will team up to stop Valeria Richards. She is the smartest woman on Earth, immortal and lonely beyond reason. After surviving a rain of nuclear missiles in Southern California and gaining possession of the reality warping Cosmic Cube, she was driven to the brink of madness. Something mysterious is unfolding in this irradiated “Dead Zone” and it’s up to our heroes to find out what, and to stop Valeria from committing an act of ultimate evil. Marvel's Wastelanders is the sixth and final installment in the “Marvel's Wastelanders” audio epic. Starring Dylan Baker as Doctor Doom, Timothy Busfield as Star-Lord, Stephen Lang as Hawkeye, Robert Patrick as Wolverine, and Susan Sarandon as Black Widow. Directed by Kimberly Senior. Original sound design by One Thousand Birds. Original music by Lindsay Jones. Story by Mark Waid. Written by Nick Bernardone, J Holtham, and Mark Waid. Learn more at marvel.com/wastelanders.